It’s decades old now, but movie-goer love for Raiders Of The Lost Ark is just as strong as ever. Joey Jones ducks behind the scenes of Spielberg’s action-adventure masterpiece to bring us some fascinating insight into the making of a classic.

Indiana Jones made his big-screen debut in Steven Spielberg’s Raiders Of The Lost Ark in 1981. The brainchild of George Lucas, and inspired by the adventure serials Lucas watched as a child, Indy is a whip-cracking, wise-cracking archaeologist who gets himself into (and out of) all manner of situations in his quest for ancient artifacts.

Raiders is now regarded as the pinnacle when it comes to action-adventure movie-making, so we thought what better way to celebrate the film than to bring you 15 facts that are so mind-bogglingly fascinating, they belong in a museum.

Both members of the movie brats, Steven Spielberg and George Lucas were good pals and, to get away from the stresses and strains of Hollywood, would often vacation together when they had a new movie out. In summer 1977, Spielberg’s Close Encounters Of The Third Kind was in post-production and, with Star Wars releasing (and George Lucas afraid it would bomb), they took off to Hawaii for a break.

At this time, Spielberg was very keen on the idea of making a James Bond movie (he had been turned down twice by Cubby Broccoli and even referenced the famous secret agent in Jaws) but George Lucas had another idea. Saying, “I’ve got something better than Bond…” Lucas told Spielberg about an idea he had for an adventure series about a whip-cracking, globe-trotting archaeologist and his quests to hunt down mythical artifacts. The rest is history.

2. The name came from Steve McQueen and George Lucas’ dog

Spielberg cited the similarities to the McQueen film, and requested a name change, but did agree the surname should be as commonplace as “Smith.” Lucas and writer Lawrence Kasdan suggested “Jones”, and Spielberg was on board.

3. The concept art is very close to how it turned out

Lucas had a very specific idea in mind for Indy’s appearance, so hired concept artist Jim Steranko to realise his vision. Taking inspiration from Humphrey Bogart’s character in Treasure of the Sierra Madre, Steranko brought Indy to life in 4 pieces of artwork. The fedora, the leather jacket, the whip, the setting. It’s all there, even if he doesn’t look much like Harrison Ford. 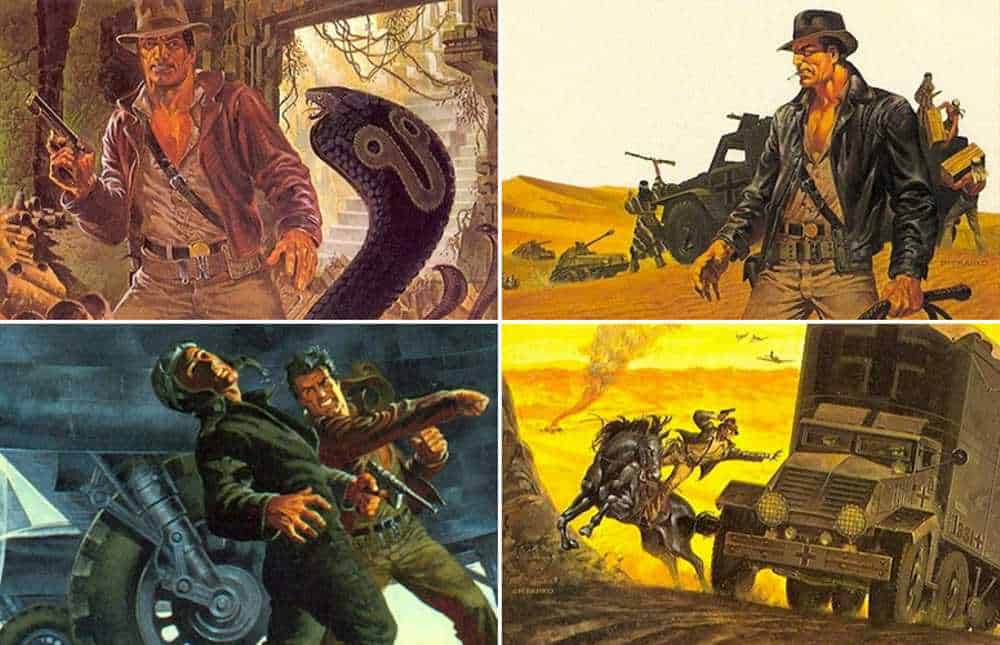 Harrison Ford is truly iconic as Indy of course but, at first, George Lucas wasn’t keen. Lucas and Ford had already worked together on American Graffiti and Star Wars, and Lucas told Spielberg, “I don’t want him to become my Bobby De Niro.”

Eventually, Spielberg and Lucas settled on the man they wanted – a moustachioed Tom Selleck – to play Indy. Selleck was cast but, due to scheduling conflicts with his hit show Magnum P.I., had to pull out. As a result, Spielberg quickly cast Ford (just 3 weeks before production began), and Selleck has been rueful ever since.

Karen Allen was cast as Marion after Spielberg saw her in National Lampoon’s Animal House. Other auditionees included:

The fantastic name of the character was conceived by writer Kasdan, whose own grandmother was called Marion. And each day, on his way to the studio in Los Angeles, he would drive down Ravenwood Court.

Unfathomable now but, originally, Paramount did not want Steven Spielberg to direct the movie. Every Spielberg feature to this point (Jaws, Close Enouncters, 1941) had went over budget and, when 1941 bombed at the box-office, the studio told George Lucas to find another director. They eventually relented when Lucas refused to make the picture without Spielberg.

Aware of his reputation though, Spielberg planned and blocked out every major set piece in the movie prior to shooting using scale miniatures and models, saving the production crew hours of planning and set up time each day. Raiders came in under budget and, after it was a smash hit, no studio ever had doubts about Spielberg again. 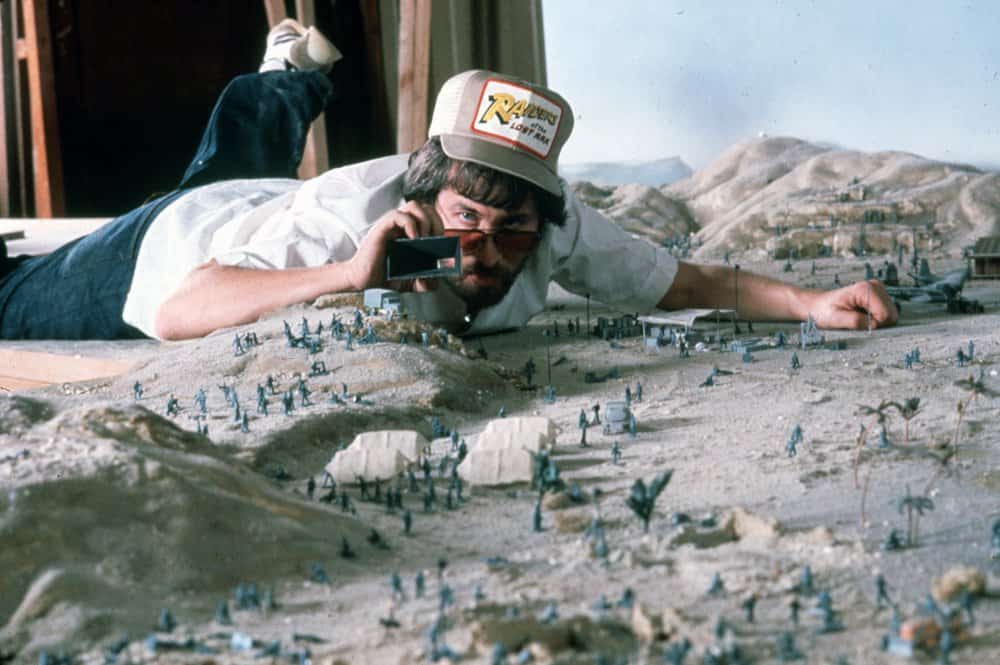 Afterwards, Lucas told the studio: “If you hire the greatest director in the world, making movies is easy.”

7. Spielberg’s first idea was the first shot in the movie

As a child making home movies, Spielberg created a make-believe production company called PlayMount (part “Paramount”, part a play on the German translation of “Spielberg”) and always had this idea of the mountain logo dissolving into a real-life mountain.

Spielberg had producer Frank Marshall drive round Hawaii looking for a mountain that matched. It took Marshall several hours, but eventually he found Mount Shubet. He took pictures, and Spielberg loved it.

Also, instead of using the 1981 Paramount logo, Spielberg used the one from the 1940s to tie in more closely with the setting of the movie.

In the opening sequence, Alfred Molina’s Satipo betrays Indy and nabs the idol for himself. There’s a moment before that though, where Indy helps Satipo out when he’s covered in tarantulas.

Spielberg wanted the tarantulas everywhere on Molina’s body but, at first, they didn’t move. An animal consultant on-set said it was because the spiders were all male and if they dropped in a female, they’d go wild. Spielberg told them to release the female spider and, when they did, the males went crazy. Spielberg told Molina, “act scared, we’ve only got one shot” and Molina replied, “I don’t need to act!”

Here’s Alfred Molina telling the story himself, rather humourously…

9. Spielberg ran out of snakes

“Why did it have to be snakes?”

The famous scene where Indy has to confront his biggest fear in The Well Of Souls – thousands of hissing, venomous snakes – was a logistical nightmare to arrange.

Originally, Spielberg had the idea of using mechanical snakes, but it was decided that they looked too fake, so Spielberg opted for real snakes instead.

He wanted 7000-10,000 snakes for the scene so, shooting at Elstree Studios, he had producers scouring every pet shop in London for every snake they could lay their hands on. However, once all the snakes were on set, Spielberg said, “there’s not enough, we need more.” London was fresh out, so the crew found hundreds of yards of rubber hoses, cut them to the approximate length of snakes, and dropped them into the pit.

10. Indy doesn’t like snakes – and neither did Karen Allen

Also during the Well Of Souls sequence, the snake handler – called Steven Edge – served as the double for Marion’s legs. Karen Allen (and her stunt double) didn’t want to stand in among the snakes so Spielberg offered Edge the chance and asked if he was willing to shave his legs and put on a dress. Which he did.

11. Spielberg was the only member of the crew who didn’t get sick

The scenes set in Cairo were shot in Tunisia, in scorching temperatures that regularly hit over 100 degrees. On top of this, almost 200 members of the crew were struck down by food poisoning. Spielberg was one of the few who was fine as his diet on the shoot consisted entirely of bottled water and tinned cans of spaghettiOs.

12. Harrison Ford improvised one of the movie’s most famous scenes

The scene in the Egyptian market place where Indy comes across a sword-wielding bad guy doesn’t play out on-screen as it did in the script. In Lawrence Kasdan’s screenplay, a fight ensues between the two men and ends in a butcher’s shop but Ford, feeling under the weather due to the sweltering Tunisian heat, said to Spielberg: “I’ll just shoot the sucker.” Lucas wasn’t keen but, when test audiences went wild over it, he changed his mind.

One of Indy’s most famous lines – “It’s not the years, honey, it’s the mileage” – was also ad-libbed by Ford.

13. Karen Allen and Paul Freeman improvised one of the less famous scenes – but still impressive

The scene in Belloq’s (Paul Freeman) tent where he gifts Marion a dress as she plots her escape was entirely improvised by the two actors. The characters have been drinking and are in fits of laughter, and the scene is several minutes long, so pretty impressive improvisation from both.

14. George Lucas got the monkey to do the Nazi salute

In the Egyptian marketplace scenes, our heroes are followed by a small capuchin monkey and, it turns out, the monkey is a Nazi spy who later reports back to Belloq. There’s a scene where the monkey, having returned to its superior officers, delivers a Nazi salute. This scene caused problems.

The monkey had been trained to make the move but, when in camera, refused to play ball. Instead, they hung a bunch of grapes just out of frame and filmed the monkey reaching up for them again and again until it worked as a Nazi salute. The operation was overseen as a second unit by George Lucas and took over 50 takes to get right. Lucas was not pleased.

The final sequence of the film sees the Ark opened, unleashing malevolent spirits that dispatch Belloq and the Nazis in a series of increasingly ludicrous (and brilliant) moments: crushed heads, melting faces and exploding brains.

The makeup effects supervisor on the film was called Chris Walas and he conceived of the whole idea. Walas made casts of the actors faces using alginate (the same substance that dentists use to make impressions of your teeth) and the face casts were then used to make face moulds on top of a stone skull, so the stone didn’t melt in the flames. Walas added gelatin, yarn and wool to mimic muscles and sinews and two heaters and a hair-dryer were placed either side of the head and, over approximately 10 minutes, the heaters melted the gelatin and mould of the face. This footage was played back and sped up, so 10 minutes becomes about 3 seconds that we see on-screen.

The moment where the Nazi, Dietrich’s, head is crushed was done by creating a hollow mold of the actor’s head then sucking the air out if it very quickly.

Spielberg called the melting head, “the most impressive effect I’d ever seen.” And afterwards, Chris Walas was flooded with calls from other effects supervisors asking how he did it so they could copy it.

And there you have it – our 15 fascinating facts on the making of Spielberg’s classic. If you know any other great trivia on Raiders, leave a comment below.

Or, head on over to our podcast section to check out or podcast episode on Raiders Of The Lost Ark.